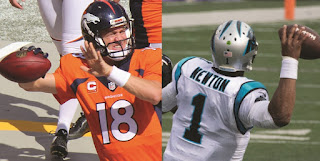 No matter whether you call yourself a die-hard Patriots fan, our just a casual watcher of the games, anyone who watched the Patriots this year thought they were destined to play for their 2nd consecutive Super Bowl title in San Francisco during Super Bowl 50. Nearly two weeks later, the devastating loss still sits fresh in the memory banks of those watched an ugly performance on January 24th in Denver. But what’s that old saying? Life Goes On? Alas, the final game of the NFL year will commence Sunday around 6:37PM when the 15-1 Carolina Panthers face the vaunted defense, and dormant offense of the Denver Broncos.

With no dog in the fight, it serves as the perfect occasion to throw a small party with friends, check out some of this year’s popular commercials, enjoy Coldplay during the halftime show and even take part in having a few “entertainment units” on the game. In a simple manner below, you will find WHY each team will win the game.

They can run the ball with even just moderate success. In the AFC Championship the Patriots flat out abandoned the idea of running the ball, leaving Denver edge rushers Von Miller, Demarcus Ware, and Malik Jackson to feast on a depleted Patriots offensive line. If the Panthers can bet positive yardage from every-down back Jonathan Stewart as well as rushes from backup Mike Tolbert and quarterback Cam Newton. Speaking of Newton, Carolina should have success and will win as long as he does not turn the ball over. As far as the Panthers’ defense goes, play smart, keep it simple, don’t try to do too much. Peyton Manning’s lack of arm strength doesn’t help out Denver at all. If Carolina can stop the run, they should be fine.

That electric and cheetah-like defense plays the game of their lives. There aren’t stud receivers on the Panthers for All-Pro Denver Cornerback’s Chris Harris and Aqib Talib to cover. In return the linebacking core must be able to contain the run and limit the big play capabilities of the Panthers. No one really expects Peyton Manning to light up the Panthers defense. Denver receivers Demaryius Thomas and Emmanuel Sanders might not put up big numbers, but they might only need one or two big plays to make a difference. If Denver is able to stop Carolina, and move the ball on the ground with running backs CJ Anderson and Ronnie Hillman then they Broncos will hoist another Lombardi Trophy.


DENVER 16
Posted by Grace Corcoran at 2:47 PM
Email ThisBlogThis!Share to TwitterShare to FacebookShare to Pinterest