If you haven’t noticed, take a look up at the next maple tree your eyes lay sight on. You will probably notice at the top that some spotty patches of yellow and orange are starting to appear. That can only mean one thing – it’s fall! Although summer brings out the most in outdoor fun and beach-combing, fall is the season of outdoor adventure and comfort. Say goodbye to the days of 90 degrees and humidity, and enter mid 60’s with clean air, perfect for a long sleeve and shorts. With fall comes a number of fun events in the Boston area. 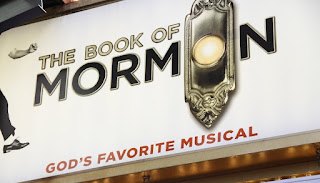 The Book of Mormon –From the creators of South Park, Matt Stone & Trey Parker, comes their first Broadway musical. The Book of Mormon has been recognized worldwide as one of the funniest musicals in years. Just like the other works of Stone and Parker, The Book of Mormon might not fit under the umbrella of “family-friendly”, but it is a must-see for those looking to laugh! 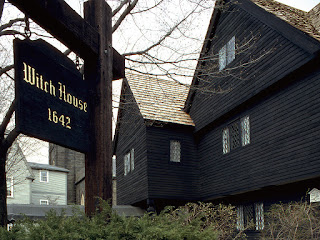 Salem Halloween Festival – With the exception of maybe New Orleans, Salem outdoes every other Halloween festival in the United States, and rightfully so. Century old tales of witch trials that took place up on the seaside North Shore city bring out the annual fright-filled festivities all throughout Downtown. The week of Halloween features live shows, haunted houses, local food and drink specials, and much more! 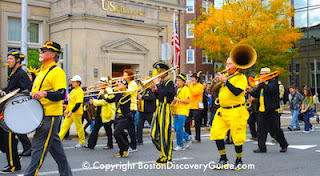 Honk! Festival – Both recognized and independent musician and bands from around the United States will flock to Davis Square in Somerville on Columbus Day weekend to play in a marching-band style parade through the streets of Somerville and Cambridge. There will be lots of colorful attire, creative facepaint, and lots of quirky fun for the whole family at Honk! 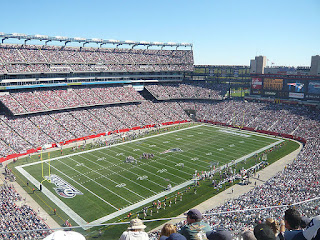 New England Patriots Football – After a successful opening night performance versus the Pittsburgh Steelers, the Patriots will return home on Sunday September 27th to take on the Jacksonville Jaguars at Gillette Stadium. The title defense is going to be tough this year, but with an easier slate of home games this year against weaker opponents, the Patriots should be in the mix come January. Other fall home games include, Sunday October 25th versus Darrelle Revis and the New York Jets and Thursday October 29th versus the Miami Dolphins. 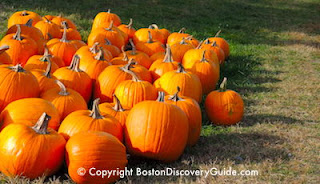 Boston Halloween Pumpkin Festival – On Saturday October 17th on Boston Commons is the annual pumpkin festival to kick off the Halloween festivities. Perfect for the whole family, if you bring an 8” or smaller pumpkin that has already been carved, and it will be lit and floated on the frog pond. Enjoy refreshments, food stands, and what should be a beautiful day in the common. 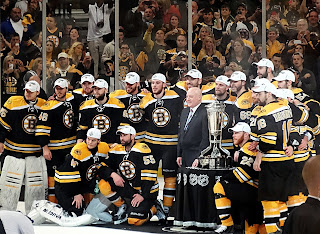 Boston Celtics and Bruins at the TD Garden – the boys of winter return this fall to the TD Garden. Coming off their surprising season last year, Isaiah Thomas and the Celtics face the likes of LeBron James, Anthony Davis, Russell Westbrook and more this year as the NBA season tips off late October. The Bruins are looking to rebound after a tough 14-15 campaign. They drop the puck Thursday October 8th against the Winnipeg Jets.

Big thanks to BostonDiscoveryGuide.com for the information and images
Posted by Corcoran Management at 11:18 AM 1 comment:

You don’t have to be an expert in the real estate industry to know that rents are rising in locations that are seeing peek demand. Economics 101: when demand is high, so will be the price. That couldn’t be a more fitting depiction of the multifamily apartment industry in the city of Boston, particularly in desirable places such as South Boston, Back Bay, West End, Beacon Hill, and the South End. It seems like every month a new large-scale luxury development is going up in the city. Rents in many of these new communities don’t start any lower than $3,000. With many young, post-college students struggling with a tough job market and burdened by large amounts of debt are finding it tougher to relocate to the city than generations past. So while rent within Boston remains far higher than any other neighborhood in the state, the actual largest amount of rent growth in the state is taking place in the South suburbs, a statistic that many find surprising.

Recently, Tim Logan of the Boston Globe wrote an article about the rise in both demand and price point in suburban locations south of Boston. At first glance you’re probably thinking the term “south” is rather vague. Well in fact this rent growth and demand spike can be seen although out south suburbs stretching from Quincy, down to Plymouth, and going as far west as Franklin and Bellingham. Logan cites quotes from regional executives that highlight those are who are priced out of the city and its immediate surroundings, are driving up prices in outlying markets in places such as Quincy and Dedham. Another outside factor is the growing hassle when it comes to commuting in the Greater Boston area. Many companies with centralized offices off of Route 128 or 495 are becoming more popular for job seekers as there is much less stress in commuting strictly suburb to suburb.

The numbers of rent growth and demand aren’t by any means surprising. Rather, they are just another local real estate trend to take note of it. Where we go from here, and what region will see this growth next, we shall see!

Posted by Corcoran Management at 4:18 PM No comments: