Giving Thanks to The Fabulous Maintenance Teams at Corcoran Management!

Only two days remain in what has been one of the most stressful, difficult, and challenging months we’ve ever seen when it comes to dealing with Mother Nature. The total winter snow accumulation has passed the 100” threshold, something that has only been seen once before in recorded history! From the rural towns outside of 495 to the “parking war-zone” on the streets of South Boston, we’ve all been affected by the snow’s overwhelming reach. At Corcoran communities all throughout Massachusetts, Rhode Island, New York, and New Hampshire, dedicated maintenance staff members have been busy around the clock dealing with insane amounts of snow, ice dams, dangerous black ice, and walkway clearing. Whether it’s a small community of 60 apartments, or a larger community with over 500 residences, it takes around-the-clock hard work and dedication to clear out the amounts of snow that we have seen in the last month.

On behalf of all the residents, employees, and partners of Corcoran Management Company, we want to take a minute to thank all of our maintenance crew members for all of their efforts and accomplishments in February 2015 and throughout the winter!
Posted by Corcoran Management at 10:30 AM No comments:
Email ThisBlogThis!Share to TwitterShare to FacebookShare to Pinterest

As this blog entry is being typed up it’s currently snowing outside….yet again. For what feels like the eighth time over the last three weeks the Eastern Massachusetts region has to deal with slippery sidewalks, unpaved roads, or public transit disruptions. It’s almost exactly one month from today that spring will officially be ushered in throughout New England. So while it may seem overwhelming to think of the winter we have left there is hope on the horizon, and not just in form of weather! The Red Sox are preparing for yet another campaign at the old ballpark off of Yawkey Way and Ipswich Street. In addition to
seeking their 9th franchise championship, they will be looking to exercise the demons that saw them perform at an underwhelming 71-91 pace last season. 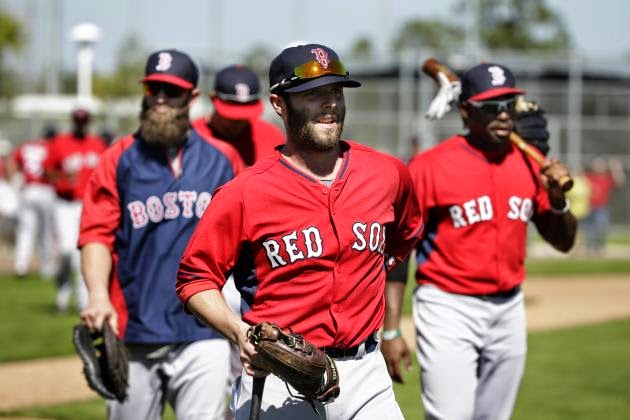 Additions like sluggers Hanley Ramirez and Pablo Sandoval join a refurbished pitching staff with the likes of Rick Porcello, Wade Miley and Justin Masterson. Those new faces look to acclimate with veterans David Ortiz, Dustin Pedroia, Clay Buchholz, Xander Bogaerts, and Mike Napoli. Many questions remain with this team. What will the starting outfield look like? Who is your opening day ace? How deep is the bullpen? It will take time to see how these questions are answered, but for now, we wanted to provide you with some big games on the upcoming schedule!

Thursday March 5th: Red Sox vs Twins – Ft. Myers,FL
It may only be exhibition, but it’s always nice to see competitive baseball being played. The annual “Mayor’s Cup” between the Red Sox and Twins begins on 3/5. It should be a comfortable 75 degrees.

Monday, April 6th: Red Sox vs Phillies – Philadelphia, PA
The 2015 journey begins in the city of brotherly love against the Phillies, who aren’t expected to contend this season. The Red Sox have been rumored to acquire Phillies ace Cole Hamels before the season. He could start the season against his old team if the trade comes to fruition.

Monday, April 13th: Red Sox vs Nationals – Boston, MA
Fenway Park’s 103rd(!) season of hosting Red Sox baseball kicks off a week after the season opener. We can probably expect the recently acquired Lombardi trophy to be carried out by members of the Super Bowl Champion New England Patriots!

Friday, June 19th: Red Sox vs Royals – Kansas City, MO
If the Sox plan on reaching the fall classic they will have to de-throne the reigning AL champions. The Kansas City Royals went on an unbelievable stretch run to make it to the World Series last year.

Tuesday September 1st: Red Sox vs Yankees – Boston, MA
The final month of the regular season will begin on this date. The Red Sox will play divisional foes from the American League East in every game they play in September. Needless to say, those games will be of the utmost importance.
Posted by Corcoran Management at 4:11 PM No comments:
Email ThisBlogThis!Share to TwitterShare to FacebookShare to Pinterest
Newer Posts Older Posts Home
Subscribe to: Posts (Atom)